This old fashioned pineapple ham is so simple to make and offers a stunning presentation. Pineapple basted with a brown sugar glaze. A vintage baked ham recipe you will want to make this holiday.

This is the perfect holiday ham. It can feed a crown, 7 ingredients is all it takes, and it’s delicious. Whether you do an Easter Ham or Christmas ham, this recipe is perfect.

Why This Recipe Works So Well

Ham | Reach for a ham that will fit okay in your toaster. I went with an 8-10 pound ham.

Brown Sugar | For the ham glaze you use brown sugar, honey, apple cider vinegar, This will become your brown sugar ham glaze.

Honey | Honey is used to help give your ham that incredible glaze and also sweetness.

Pineapple | Pineapple and Maraschino cherries help to complete the ham!

Preheat your oven, and place toothpicks in water and let them soak as you prep your ham.

Use a sharp knife and score your ham about 1/4-1/2 inch thick in a grid-like pattern. This will help the glaze soak into the ham.

Place the ham in a roasting pan or baking tray.

In a saucepan, you want to add in your honey, brown sugar, apple cider, and dijon mustard, and cloves. Cook on medium heat.

You want to cook until the brown sugar is no longer gritty in tenxture.

Pour half of the brown sugar glaze over the ham, and use a basting brush to get into the nooks and crannies.

Take your soaked toothpicks and start to secure the pineapple rings all over your ham.

Add in 1/2 cup of water into the pan with the ham, and cover with tinfoil. Cook for 1 hour in the oven.

Now you will work on cooking your brown sugar glaze and work to reduce the mixture by half, stirring occassionally on low.

Remove your ham and take the remaining brown sugar glaze and baste your ham. Then return to the oven uncovered and continue to cook.

Every 15 minutes baste the ham with the glaze and mixture that is in the bottom of the pan.

You want to make sure the internal temperature of the ham reaches 145 degrees F.

Baste or brush the ham with the syrup every 15 minutes, continuing to bake for 1 more hour, until ham reaches an internal temperature of 145F.

Before serving, remove the toothpicks and insert a maraschino cherry into the center of each pineapple ring. For a gorgeous presentation.

Buying a bone-in ham is going to give you the most flavor. Just like any meat with a bone it helps lock in so much more flavor.

Now if you don’t want a bone that is okay. I do recommend skipping a dinner ham. Dinner hams are compressed ham which is going to be like lunch meat in terms of texture and flavor.

A spiral ham can work it is just more apt to dry out as it bakes.

How to Score A Ham

Scoring a ham refers to when you take a sharp knife and cut into your ham in a pattern. You might be thinking why do you score a ham?

Scoring a ham is a wonderful way to get the flavor soaked down into the meat. As well as allowing your fat to render down as it bakes in the oven.

How Long to Bake

The ham should read 145 degrees internal temperature once the ham is fully warmed and ready to serve.

Even if you are cooking a pre-cooked bone-in ham this is still the suggested temperature to aim for before slicing and serving.

Allow your ham to rest 5-10 minutes before carving.

How do I cook a precooked ham?

Set your oven to 325 degrees. Prep your ham and then bake ham in the oven for 10-15 minutes per pound. Use a meat thermometer to read the internal temperature of 145 degrees.

Why do you soak toothpicks in water for baking ham?

Since you are going to use toothpicks to secure pineapple rings and cherries on ham, you need to soak toothpicks. The toothpicks will retain water and stay moist as it bakes, instead of drying out and turning black, and burning.

What to Serve with pineapple ham?

Do you add water to a baked ham?

I recommend adding at least ½ cup to a whole cup of water when I bake ham. This will help to prevent the ham from drying out. Also covering with aluminum foil or lid is a must as well. Then at the end remove the lid to help caramelize the glaze. 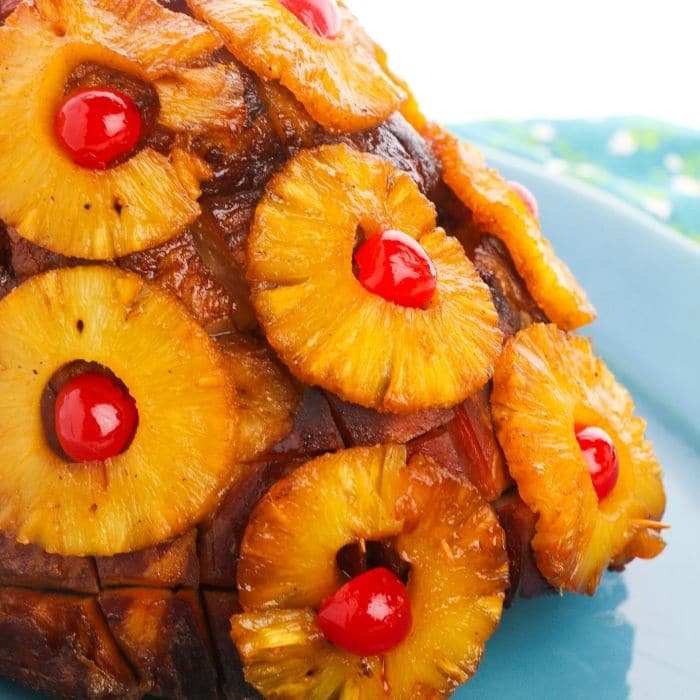 For a crispier skin you will want to do 400 degrees the last 15 minutes of baking. Make sure your ham reads an internal temperature of 145 degrees, to ensure the ham is fully heated. Depending on the size of your ham will depend on the time it needs to cook. Aim for 10-15 minutes per pound. You don’t have to use the cherries if you don’t want to. Once you slice up your ham, feel free to serve up the pineapple rings as well.

Do you like this pineapple ham? Let me know in the comments. 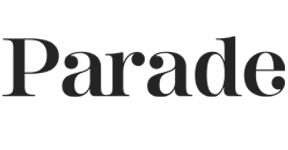